The holy grounds of Rosaryville have existed since 1890, when  Benedictine monks  from St. Meinrad Seminary in Indiana, at the request of Archbishop Janssens of New Orleans, arrived by boat to establish a monastery in Louisiana. It was given the biblical name, Gessen.

Young men were prepared for the priesthood and religious life on grounds they cleared within 2,000 acres of pine and oak forests, near the present towns of Springfield and Ponchatoula.  The three-story building they constructed for their housing contained small adjacent rooms facing north and south, opening to galleries which ran the length of the building. With inadequate tools they skillfully drilled a deep well from which artesian water has continued to flow. Because they lacked electricity for refrigeration, a storage space was dug in the ground four feet deep, where, in that cool temperature, they stored the food they harvested. This  ancient underground refrigerator was discovered in 1974.

After a decade of struggling without proper equipment for farming, as well as poor soil and troublesome mosquitoes, the monks sought elsewhere for the establishment of a monastery. They settled on the grounds of what is presently St. Benedict, Louisiana, near Covington, establishing St. Joseph Seminary and Abbey.

Meanwhile, civil strife in Spain made the Dominican Fathers decide to place their House of Philosophy for students preparing for the missions of the Far East somewhere in America. This way, the students would not be interrupted by compulsory military training. Father Thomas Lorente of the Holy Rosary Province negotiated with the Benedictines to purchase Gessen, and in 1911 their new institution was established and renamed Rosaryville.

The Dominicans renovated and added to what was built by the Benedictines while their students continued their studies and the priests ventured out to minister to the Churches of Amite, Independence, Tickfaw, Hammond, and  Ponchatoula.

Eventually, as the war in Spain continued to claim the lives of the friars and young students there, the Dominicans found it necessary to recall their men to Spain to fill the immediate needs. Almost a century later the remains of those young Dominicans who lost their lives during that war were returned to Rosaryville to rest with their brothers in the Father’s’ cemetery.

Knowing that the St. Mary’s Dominican Sisters in New Orleans were considering moving their novitiate out of the city at that time, the priests gave them the first option on Rosaryville. In 1939 the prioress, Mother Catherine Delany, acquired the property for $6,000 for their novitiate, which included an extension of Dominican College for those in formation, as well as housing for the retired Sisters. In 1946 an Aspirature for high school girls interested in religious life was added. Four years later the remains of the Sisters buried in New Orleans were transferred to the Rosaryville cemetery.

To the the buildings  constructed by the monks and friars, was added Rosary Hall in 1955 – a three-srory brick structure containing a large chapel, dormitory, dining room, kitchen, and parlors.  In earlier years, the Sisters, knowing that shrines were needed to enhance the grounds, had raised funds to construct a large stone grotto in which they placed a statue of Our Lady of Lourdes, with St. Bernadette at her feet. Later, benefactors supplied funds for a pond and waterfall, to which has been added gardens.

Modernization of the grounds was to continue in the 1960’s with the addition of a two-acre lake and an olympic-sized pool, as well as shrines of Our Lady of Fatima, St. Joseph, St. Dominic, and St. Kateri. The first half of that decade continued to witness the vitality ever-present in Rosaryville’s buildings and on its grounds as bells rang for high school classes, and the postulants, novices, and young professed Sisters went about their spiritual formation and charges, along with attending college classes and caring for the retired Sisters. From the chickens and cows in the barnyard, fresh eggs and milk were always available, and the strawberry crop in the spring enhanced their desserts – especially the homemade ice cream the novices churned outside daily.

Young girls continued to enter not only  Rosaryville’s novitiate, but  those throughout the country in large numbers in order to dedicate their lives to God. During the 1960’s, however, after the Vatican Council in Rome had “opened the windows” to a modern Church enveloped in a new culture and religious mindset, the number of  religious began to drastically decline, and in 1967 the novitiate that had attracted so many young girls for almost thirty years finally closed its doors two years after those of the Aspirature.

A new convent, St. John Hall, had been built in 1966 to relocate the retired Sisters from their ancient wooden structure to the modern facilities of private rooms, a laundry, community room, and small chapel. There they resided for fifteen years before moving into the newly renovated Motherhouse in New Orleans, formerly a dorm on their college campus.

Two years after the closing of the novitiate the Sisters decided to use some of the vacant  facilities for a girls’ summer camp, choosing as its patroness Blessed Kateri Tekakwitha. In 1969 Camp Kateri received its first group of campers, who were housed in the old novitiate building. In an attempt to increase the camp’s enrollment, three Southeastern students offered and were commissioned to build a stable, and the presence of borrowed horses that following summer, along with the closing of Camp St. Gertrude in Covington, tripled the number of campers.

Because of the age and unsafe condition of the novitiate building, the gymnasium which had been built for the high school was renovated in 1975 to house the campers and provide a large indoor activity and dining area. Seven years later the gym was named Kateri Hall, and began  welcoming youth retreats, workshops, and other events that have continued throughout the years, as well as campers every summer.

In 1971 the Dominican Fathers of the southern St. Albert Province made the decision to bury their deceased priests and brothers in the Spanish Fathers’ cemetery which is near that of the sisters on Rosaryville’s grounds. After burials, when the friars in their white Dominican habits leave the cemetery, they and their guests head for a celebratory meal in the Rosary Hall dining room.

In 1981 the Rosaryville Spirit Life Center was established.  Adult retreats and various other spiritual  events continue to take place, as those participating are housed in St. John Hall, where they also assemble for their meetings in the large Conference Room. They attend Mass and have their meals in Rosary Hall, as do the retreatants from Kateri Hall.

Gone now are the wooden three-story buildings, hikes through paths in the woods, the barnyard animals, which included pigs and sheep, the strawberry field, and the happy sounds of young girls in formation anticipating life as a Dominican Sister. What continues,however, is the constant awareness of God’s presence on those holy grounds. 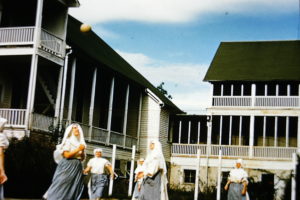 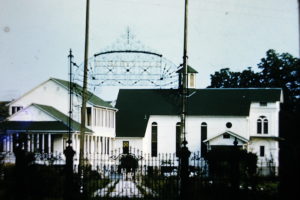 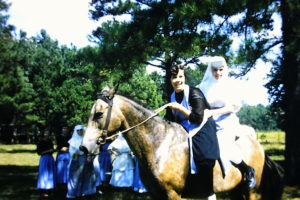 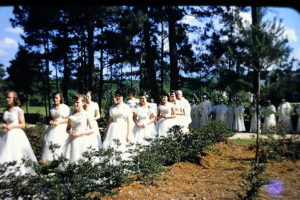 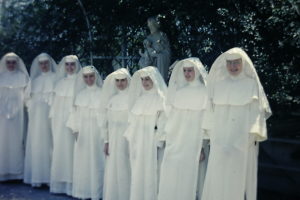 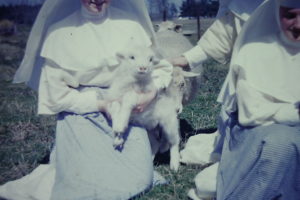 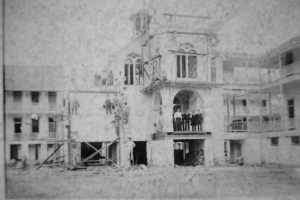